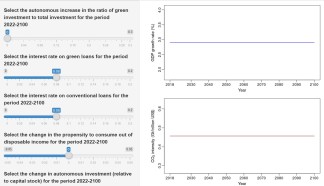 DEFINE-SIMPLE is a simplified module of DEFINE that shows how consumption and investment decisions can affect the path of key economic variables and carbon emissions. A brief description of the DEFINE-SIMPLE module is available here. The R code of the module can be downloaded here.  This web interface allows you to use DEFINE-SIMPLE to explore the effects of the following key factors:

Note:  In this interface it is assumed that without any change in the parameter values economic growth remains constant throughout the simulation period. An increase in the interest rate causes an increase in economic growth because households receive all the profits of banks and the propensity to consume is the same for all sources of income (which effectively implies that the propensity to consume out of capital income is relatively high). The module does not include the feedback effects of climate change on economic growth. These effects are incorporated in DEFINE, but have been assumed away in the interface for simplification purposes.

Paper in the Journal of Financial Stability